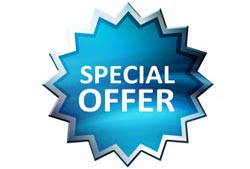 Kanda PLD trainer includes everything needed to learn about PLDs and CUPL descripion language, test board for trying designs and a universal programmer that can also program memory chips and microcontrollers as well as PLD. ATF15xx CPLD programmers and development kits are also in stock.

This PLD logic training kit has an experiment board with an Atmel AT 16V8 and lights, switches, 7-segment LED, Clock and output enable. A version of CUPL description language especially for Atmel PLDs and a book on CD are included in the logic training kit and a full version of CUPL description language can be downloaded. Plus a USB programmer for Atmel 16V8, 20V8 and 22V10 PLD, Lattice PLD, serial EEPROMs and other memory. 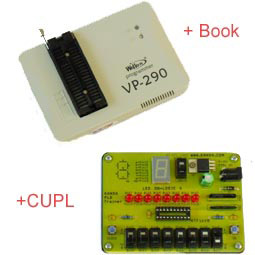 This kit is the USB version of Atmel's ATF15xx-DK3 developmement kit. It includes a board with 44pin TQFP socket, a USB CPLD programmer (ATDH1150USB-K), two CPLD sample devices (ATF1502 and ATF1504) and links to all software needed to develop CPLD applications. 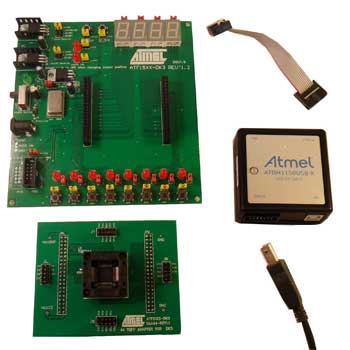 This is the updated ATDH1150USB CPLD programmer for In System Programming of Atmel ATF15xx CPLD chips. It uses Atmel ATMISP 7 software. 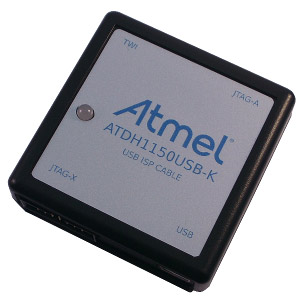 Atmel simple PLD (Programmable Logic Device) such as 16V8 and 22V10 are flash based programmable logic, so are re-programmable 100's of times. They are configured using the CUPL Description language and can be equivalent to older PAL and GAL devices or used as 16V8 or 22V10 devices.

The 16V8 PLD is ideal for logic training and general electronics as it can be programmed to be logic gates, inverters, flip-flops and registers using the CUPL programmable logic description language. It, and other Programmable Logic Devices (PLD)like 22V10 also give security and flexibility to your electronic circuits. 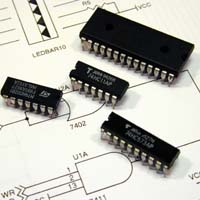 CUPL Programmable Logic Description Language is a compiler that converts logic equations into a Fuse map (JEDEC file) for the PLD programmer. Pins can be named using Kanda template, logic equations are simplified, Karnaugh maps can be employed and state machine techniques can be used.

The full version of CUPL programmble logic description language has simulation tools for testing equations, syntax for state machines and support for CPLD.

ATF15xx-DK3-U CPLD Board and ISP