In System Programmers allow a wide range of devices to be programmed in circuit or in system. This is easier for production as well as field updates. Most modern microcontrollers, some memory and CPLDs are ISP capable. 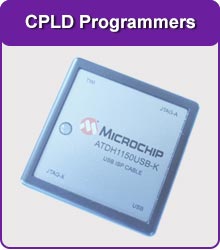 Products in this category

Programming Adapter with ZIF Socket
ISP2ZIF is an adapter for programming of all types of devices using In-Circuit Serial/In-System Programming (ICSP/ISP). The adapter is fitted with the 40-pin Zero Insertion Force socket (ZIF) which acce
Order Code
ISP2ZIF
Price: $66.00
Universal ISP Board with ZIF Socket
Add to Cart

In System Programming or ISP allows devices to be programmed in the finished circuit rather than in a separate socket programmer. This has many advantages both in production and for firmware updates in the field.

In production, the device to be programmed can be placed on the PCB along with all other components. ISP can then be used to program it later. This could be with test code first, followed by final production code giving flexibility to the testing and quality process.

You can also use an In System Programmer to customise products later in the production cycle. For example, a standard product can be tested with test code and then left until it is ordered. At this point, it can be programmed with different firmware versions to customise it for that specific order.

ISP circuits are not complicated and only involve a few components such as an ISP header and a few resistors and capacitors so are a cost effective way of adding extra flexibility. This really pays off if you need to change the firmware later. This may be to fix a bug, add new features or provide custom options for a customer. Doing a firmware update using ISP is pretty easy especially if you make the connector easily accessible and use one of our handheld or keyfob programmers. Even with a laptop, an engineer would not have any problems.

Most microcontrollers now have ISP capability, including AVR, PIC, COP8 and ST7. Serial EEPROMs and flash memory chips can also be used as well as PLD and CPLD devices so using ISP should be your first choice.