Kanda have become distributors for Waveshare who manufacture low cost but high quality products. As well as a range of Arduino boards and shields, Waveshare make AVR microcontroller tools, Bluetooth, WiFi and Zigbee modules and FPGA development kits and programmers.

Waveshare have produced their own version of the popular Arduino Uno board, called Arduino Uno Plus. It has a better layout to prevent shields fouling the motherboard, including micro-USB connector, lateral reset switch instead of vertical and low profile power connector.

As well as the improved layout, it has other improvements to the standard Arduino Uno. It has dual voltage support, 3.3 and 5V and it can supply 800mA rather than the measly 150mA of the original. It also has a much more accurate crystal oscillator instead of a ceramic resonator and features a bootloader switch to run code more easily.

The Arduino Plus is a much improved version of the Uno but is still really affordable. 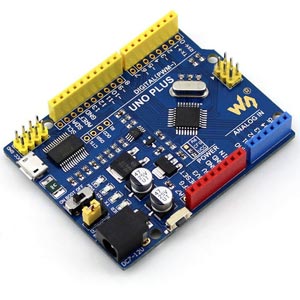 As well as Uno Plus, Waveshare supply it bundled with an I/O expansion board and a sensor pack covering a wide range including humidity and temperature, tilt, liquid level, moisture, gas, IR, UV, current and sound. This kit can be used as the basis of many projects, is very low cost and comes with schematics, documentation and code examples. 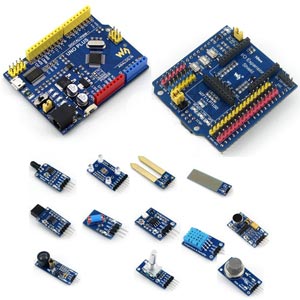 There is also a range of the most popular shields including motor control, analog ADC and DAC, WiFi and accessories like joystick, OLED, Xbee, RGB LED and RTC (Real Time Clock).

Bluetooth
Waveshare Bluetooth 4.0 modules are based on the ARM based super powerful NRF51822 chip that has all the features you will ever need. A low cost motherboard gives you a superb development platform for all your applications. If ARM is a bit advanced for you, Waveshare also supply a much simpler serial to Bluetooth board with simple pin header connector, which is ideal for microcontrollers like PIC and AVR.

AVR Tools
Waveshare AVRISP-MKII is better and more reliable than the original Atmel version and comes with more adapters to connect to your ISP header. They also do their own much lower cost version of the JTAGICE-MKII AVR emulator. Both of these tools work from all AVR Studio versions.