This is a question we are often asked. I want a genuine Atmel AVR ISP MKII (ATAVRISP2) not a Chinese clone, can you supply it? Unfortunately the answer is no as Atmel have stopped manufacturing their ATAVRISP2 programmer.

Why Atmel have stopped making it is a bit of a mystery. Perhaps they can’t compete with all the clones out there or possibly they want to concentrate on their ICE products like AVR Dragon and AVR ICE2.

The first bit of good news is that they haven’t stopped software support for it. AVRISP-MKII is still supported in the latest Atmel Studio release so to date this tool is in all versions of AVR Studio and Atmel Studio. The AVR microcontroller support list has also been kept up to date and the latest chips appear in the device support list.

The second bit of cheeriness is Atmel released the protocol it uses and they also released the schematics or they have been copied. This means that other manufacturers have been able to make them so that they are recognised as AVRISP mkII by Studio and by Atmel Jungo USB drivers. This means that they work exactly like the Atmel original, including the built-in AVRStudio firmware updater.

Although there are several companies making clones of ATAVRISP2, most have omitted some of the features. For example, the original Atmel AVRISP MKII has a unique serial number so that more than one programmer can be connected to a PC as AVR Studio can identify the different units using it. Most copies do not include this feature.

The best AVR ISP MKII we have found is by Waveshare. It acts just like the genuine Atmel programmer, including a unique serial number. Atmel Studio treats it just like an ATAVRISP2 and the firmware updater works perfectly. It is better than the original with connector types as it includes 6 and 10-way AVR ISP interfaces and a flying lead adapter for ATxmega programming.

This is still the best programmer for development because

The only downside is that it can only run from within AVRStudio. This is annoying when you have finished development and need to do some production programming. However, low cost programmers such as Kanda AVRISP-U will fill this gap.

In conclusion, you can’t get a genuine Atmel AVRISP MKII but this does not matter as alternatives like Waveshare AVRISP-MKII work just as well. 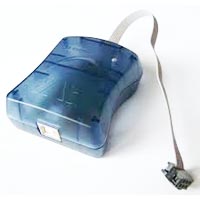 One thought on “Can I Get a Genuine Atmel AVRISP MKII?”