Portable PIC programmers allow engineers, developers and technicians to work much faster and with minimal difficulty. They can be pre-programmed with various different programs via a PC, then uploaded to a PIC microcontroller by simply plugging in and selecting the right one.

The fact that they are portable means programming can take place anywhere, whether on a production line or in a workshop. Kanda is one of the world leaders in PIC development and we are well known for providing a brilliant range of hand held devices. Our newest Portable PIC Programmer is a further step forward and provides even more benefits for users whilst still being very easy to use.

The original hand held had 256KB of memory but could only have a single program uploaded to it. An 8-way model followed this, allowing users to upload 8 different programs. Now, the Portable device has eclipsed this with an incredible 32 256KB program slots.

The Portable PIC Programmer is plugged into a PC via USB using the interface provided in the kit. Programs can be uploaded using the specially developed software. Each time you plug in the programmer will be read to display all of the programs that are on it. These are listed with a specific number, title and target PIC so you can easily identify them. Making changes and adding new programs is simple and can be accomplished in just a few clicks.

The programmer is far more portable than a laptop and much easier to carry around so that programming can take place practically anywhere, even cramped conditions such as a production line. The keypad is easily laid out and users simply enter the slot number they want. This will bring up the title of the program on the LCD to ensure you have selected the right one. If the slot is not used it will say Not Available and you’ll need to input a different number. When you are happy you have the right program you press a single button and it will be uploaded to the device.

Kanda is one of the leaders in the microcontroller field and has extensive experience with PIC programmers. We are a brand you can put your faith in to supply the best programmers, components and other items people need to work with a wide range of microcontrollers. 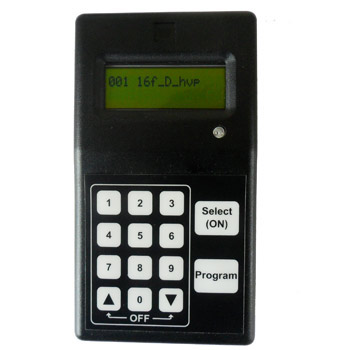