The Wellon VP-290 Universal Programmer is one of the cheapest universal programmers on the market but its build quality and reliability are excellent. It only has a 40-pin ZIF socket unlike other Wellon programmers that have 48-pin ZIF sockets. This means it is really only suitable for devices with 40 pins are less. The only exception is chips in 44 PLCC packages, such as AVR microcontrollers, which are supported by the VP-290.

Although, in general, only chips with 40 pins or less are covered, this includes a wide range of commonly used devices. It is especially good for PLDs (Programmable Logic Devices) including Atmel ATF series, Lattice GAL devices, ST and VLSI PLDs – 16V8, 20V8 and 22V10 families. As it is only 40-pin, CPLDs such as Atmel ATF1504 are beyond this programmer but simple PLDs are sufficient for most applications and training purposes.

All Serial EEPROMs are covered, like 24C, 25C and 93C series. These are the small memory chips commonly used in applications such as engine management, computer motherboards, USB configuration and many more. Socket adapters are available for all package types and chips from different manufacturers are supported.

Other small memory chips – 27, 28, 29 and 39 series memories from lots of manufacturers, are covered along with some more obscure memory chips, giving wide support for common memory devices.

In summary, device support is excellent for the price with about 15,000 devices but just like other universal programmer manufacturers, Wellon exaggerate the number by including the same chip in different packages as separate devices. But, for a general low cost universal programmer, it will cover most peoples needs. It does not support In System Programming (ISP) unlike more expensive Wellon programmers with a 48 pin ZIF socket but you get what you pay for.

What about the software, which is what makes a universal programmer easy to use? Wellon use one piece of software for all their universal programmers and it will load the appropriate core if it detects a VP-290. Wellon have finally managed to create one software application for both 32 and 64-bit Windows, which makes technical support much easier – we had lots of grief with people loading the wrong version so it didn’t quite work! Forget niceties like Linux or MAC support or DLLs and command line software as these are low cost programmers.

The software itself is shown here 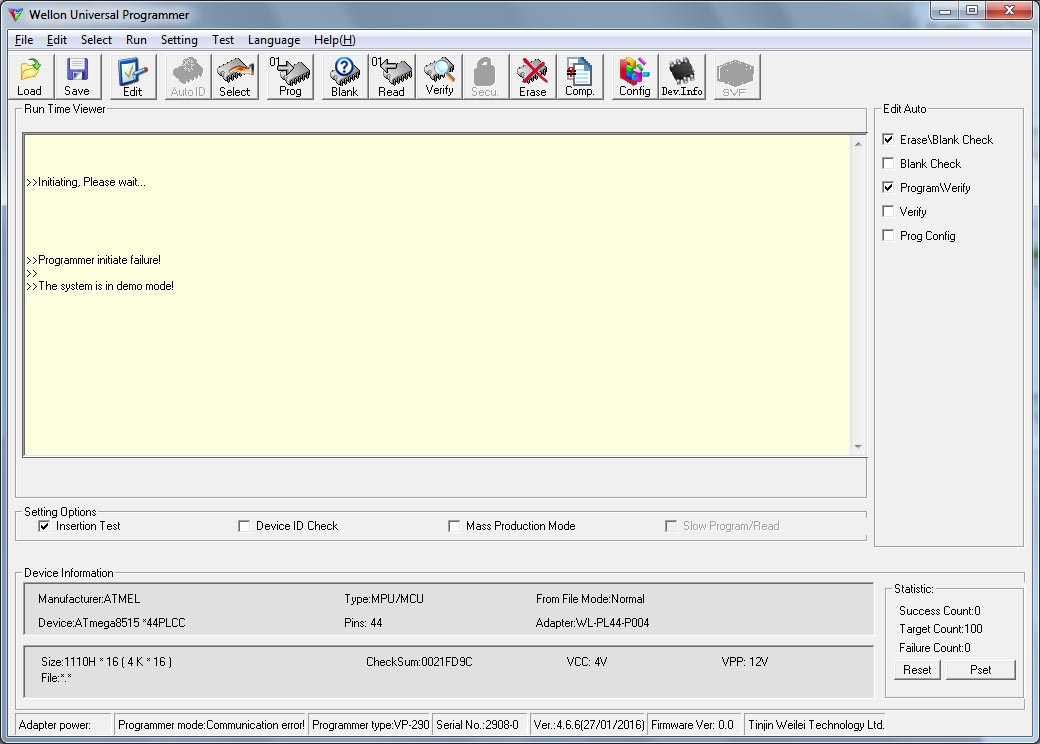 It makes it easy to select devices and has buttons for different common programming operations. The nice extra features are Insertion Test to check the device is correctly placed in the socket, Device ID Check to verify that it is the correct device and Mass Production Mode for faster production programming. The configurable Auto Program option also makes repetitive jobs much easier. 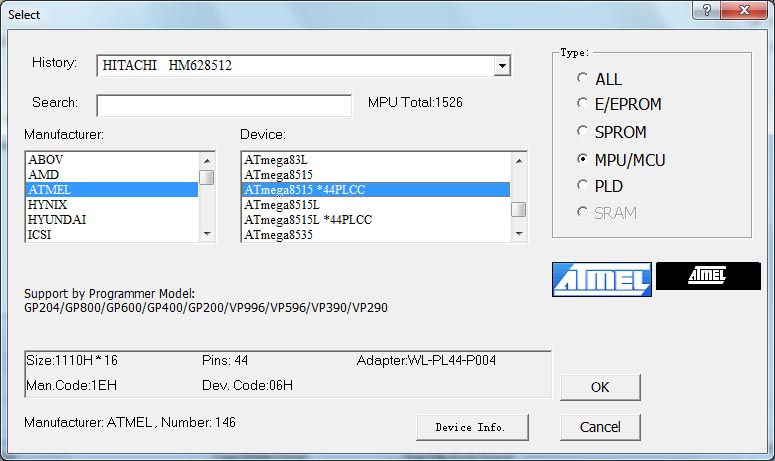 Once you select a device, it gives you information about its ID, number of pins and package type. It also tells you what socket adapter is needed, if any. If your chip, does need a socket converter, clicking on Device Info button shows you its package dimensions, part number format and the pin-out of the socket converter, which can be useful. 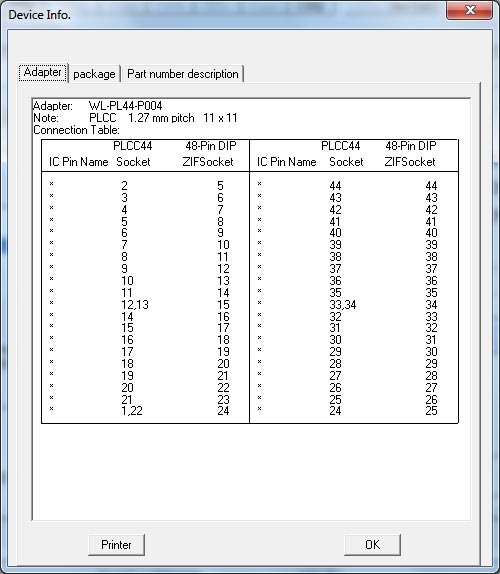 Conclusion
The Wellon VP-290 universal programmer is a very low cost unit but uses the same software as other more expensive programmers. It is small and light weight but well constructed and we have found them to be very robust in service. The only limitation is the 40-pin ZIF socket, which limits the device support but as a useful general lab or workshop programmer, it functions very well.