Smart Cards are a bit of a misunderstood subject and no-one is quite sure what they are. Smart Cards are defined in a standard called ISO 7816. This has different sections that cover physical size and characteristics, where the contacts should be (for contact cards) and how to communicate with them.

ISO 7816 does not define the electronics and a smart card can have just a memory chip, or more likely nowadays, a microcontroller and a memory chip. The standard does define how data should be read/written to the memory, using serial communications. This is often called “Phoenix” mode in discussions about smart cards. A second communication protocol uses a clock and is known as Smart Mouse.

The Smart Card Programmer we sell supports both these modes, so can be described as supporting ISO 7816 smart cards. These cards are used for telephone cards, bus passes, door entry and all sorts of applications, but for obvious reasons such cards are often encrypted and do not allow writes. 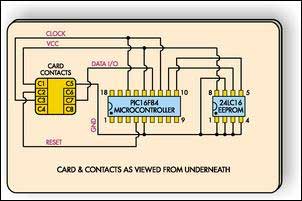 The PIC microcontroller (or AVR) is loaded with firmware by the smart card programmer. This firmware reads and writes data from the EEPROM chip using I2C bus, and returns it to programmer as serial (phoenix) data (ISO 7816 compliant).

This firmware is available as source code for your own projects when you purchase the programmer, with another version that uses AES encryption. A full developers starter kit is also available free of charge. A command line interface is also included, which you could call from your own high level application to read and write to the cards using ISO 7816 communication.

This means that you can develop your own PIC or AVR code and use this smart card programmer to program the smart card. You could use a generic PIC programmer but would need to solder it to the contacts on the card.

As well as being a smart card programmer USB Infinity programmer can also be used to edit, copy, restore and back up SIM cards using a separate slot on the programmer.

It is a USB programmer, but it enables a virtual COM port so most 3rd party software developed to read specific cards using a serial port, like Fedex Jungo, can be used with this programmer hardware. 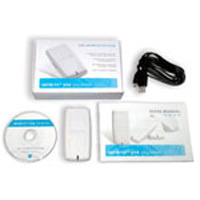