So what considerations are important when choosing a new programming system?

Firstly, where possible we use ISP (In System Programming) and all our own products are manufactured using ISP but that is not always possible and ISP will be discussed further in another post. We also carry out contract manufacturing and assembly, and this is where we needed a new socket programming solution.

In no particular order, here are the important points we came up with.

If we need to program large pin count devices (100 pin plus), then we need a programmer with more pin drivers, but even 64, 68 or 84 pin devices are often better on a larger programmer, with 144 pin drivers. This is because one socket adapter, say 84-pin PLCC, can be used to program many different devices on this programmer, because it is a universal socket.

On a programmer with only 48 pin drivers compromises have to be made to map the 84-pin device to 48 pin and lots of pins are not connected. This means that different versions of the socket converter are usually needed for different devices, even though they are in the same package.

The next decision is PC based or standalone operation. Standalone operation, using data on an SD card and a programming button, requires far less operator training, is easy to control and produces fewer errors. There is also no need for a PC on production line. As most standalone programmers also have PC mode, that can be used by engineers and R and D, this is also a no-brainer – if possible get a programmer with standalone mode for production.

Programming speed, reliability, new device updates and good technical support are down to choosing a reputable brand, not some Chinese upstart. Xeltek, Dataman and Elnec are the three main players and we consider Xeltek to be the best, which is why we supply their products.

The Xeltek programmer we are going to choose for our own production is Xeltek SP501S Programmer. We have made this choice because

If we did anticipate programming larger devices, then Xeltek SP7000 Programmer would be a better choice. 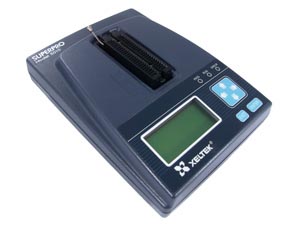